Examples of common errors indicating that there probably is a networking issue:

When troubleshooting networking issues, it is important to first understand what type of networking the integration or automation is using. Cortex XSOAR integrations and automations can be classified into two main types regarding their networking use:

If the integration/automation is using HTTP based communication we recommend testing as a first step locally via the curl utility if it is possible to perform network communication with the HTTP endpoint. Run the curl command on the Server or Engine machine by logging in via SSH. Common curl command variants (httpbin.org is used as an example url):

More info about curl is available at Everything curl.

If you are not able to perform a basic curl request from the machine to the target HTTP endpoint, the issue is probably not a problem with the integration/automation but rather with the networking setup of the Server/Engine machine. Make sure to first resolve the networking issue so a basic curl command succeeds before continuing to test the integration/automation. Many times this resolves to a firewall, NAT or proxy issue.

As with Host Based Networking, for integrations/automations that use HTTP endpoints we recommend testing as a first step with curl from within a docker container. This can be done by logging in to the Server/Engine machine via SSH and running the following command:

Note: You may need to run docker with sudo or login with root if your user doesn't have sufficient permissions to execute the docker command.

For cases that running with Docker's networking stack continues to cause issues, there is an option to run Docker containers with host networking. In this mode, the container will share the host’s network stack and all interfaces from the host will be available to the container. The container’s host name will match the hostname on the host system. You can test this mode by running a curl command via docker in the following form:

If running with --network=host succeeds, you can configure the Server to use host networking for docker by adding the following advanced server configuration in Cortex XSOAR:

After you add the server configuration, run the /reset_containers command from the Cortex XSOAR CLI to reset all containers and to begin using the new configuration.

Examples of common errors indicating that there is an issue with trusting a TLS/SSL networking connection:

These errors are usually as a result of a Server using an untrusted certificate or a proxy (might be transparent) that is doing SSL/TLS termination.

Use the CertificatesTroubleshoot Automation to retrieve and decode an endpoint certificate. Additionally, use it to retrieve, decode and validiate the custom certificates deployed in Docker containers.

Cortex XSOAR (Server 5.0+) supports running Python integration commands and automation scripts in debug-mode from the Cortex XSOAR CLI. When a command is run in debug-mode a log file of the command execution will be created and attached to the war room. When encountering an issue which is related to an integration or an automation, make sure to reproduce the command with debug-mode and inspect the generated log file. The debug-mode log file will contain information not available in the Server logs and can provide additional insights regarding the root cause of the issue. Additionally, some integrations have specific code to include extra debug info when run in debug-mode.

Run a command in debug-mode#

In the Cortex XSOAR CLI run the command with all arguments that cause the issue and append the following argument: debug-mode=true. For example:

Screenshot of running a command with debug-mode=true and the resulting log file (ad-search.log): 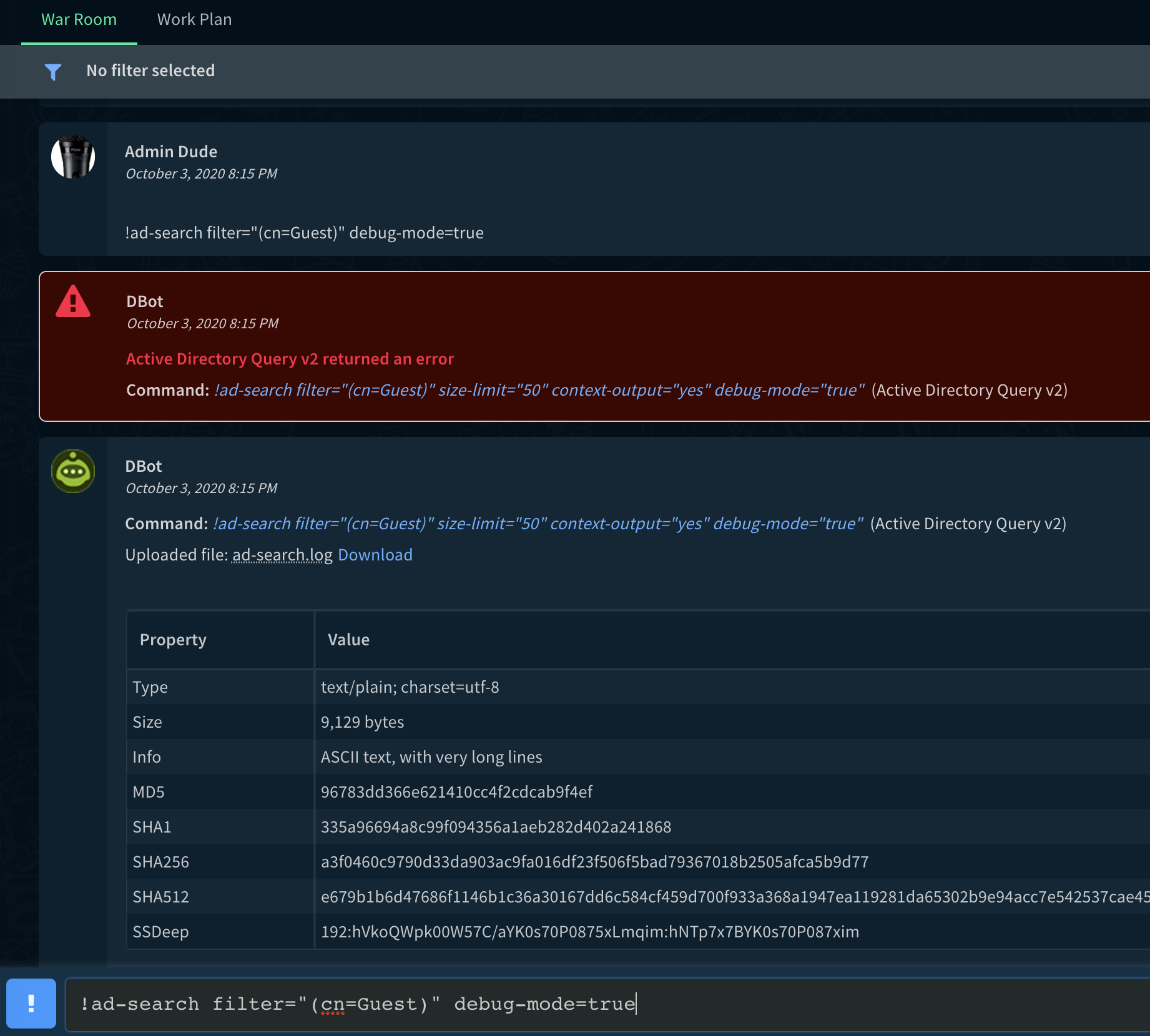 Starting with Cortex XSOAR 6.0 it is possible to run the fetch incidents command from the Cortex XSOAR CLI with debug-mode=true. This is done by issuing a command of the form:

For example for an integration instance name of: Cortex_XDR_instance_1 run the following from the CLI:

Screenshot of running a fetch command with debug-mode=true and the resulting log file (fetch-incidents.log): 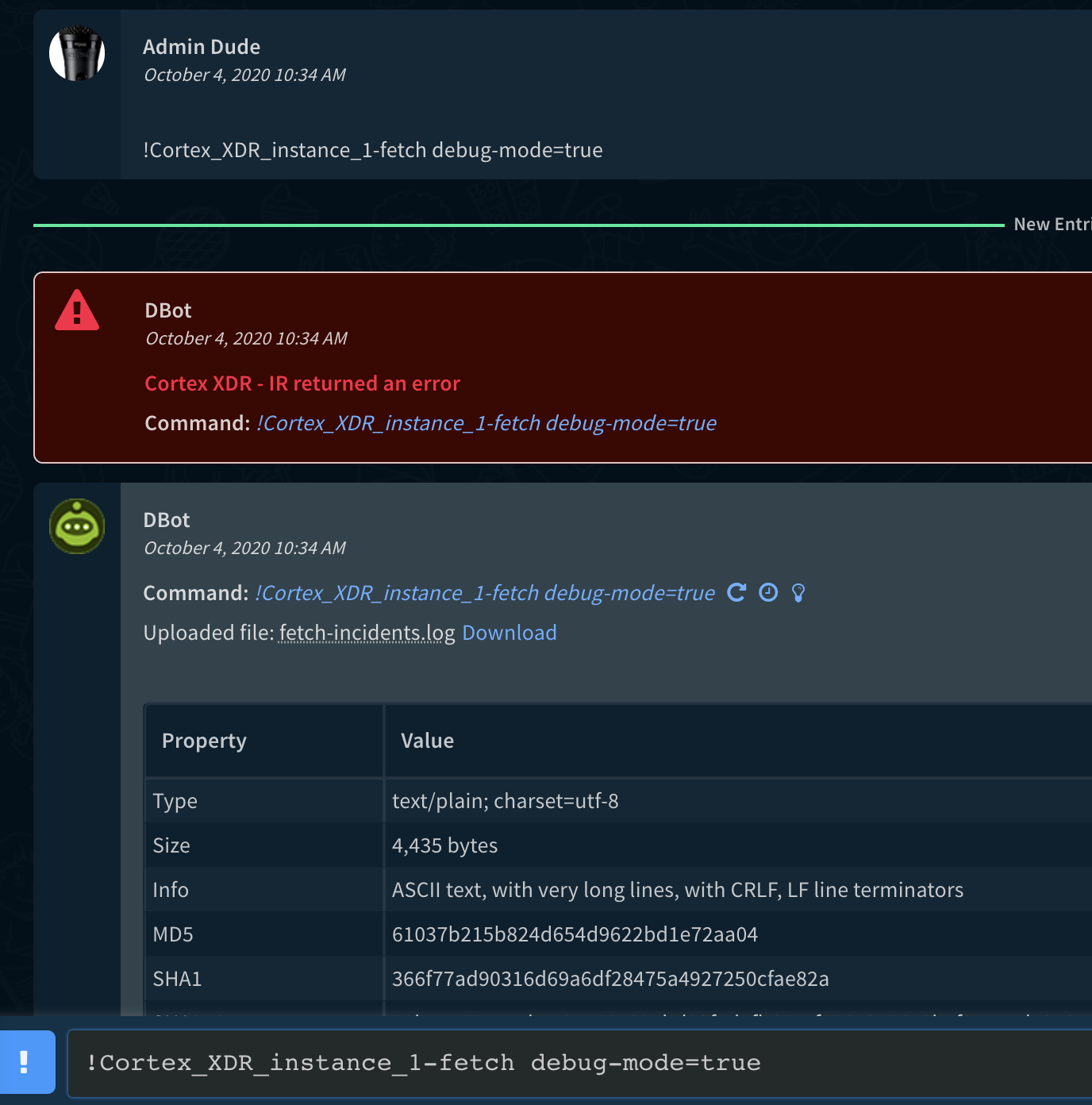 Starting with Cortex XSOAR 6.0 it is possible to run the test integration module command from the Cortex XSOAR CLI with debug-mode=true. This is done by issuing a command of the form:

For example for an integration instance name of: Cortex_XDR_instance_1 run the following from the CLI: 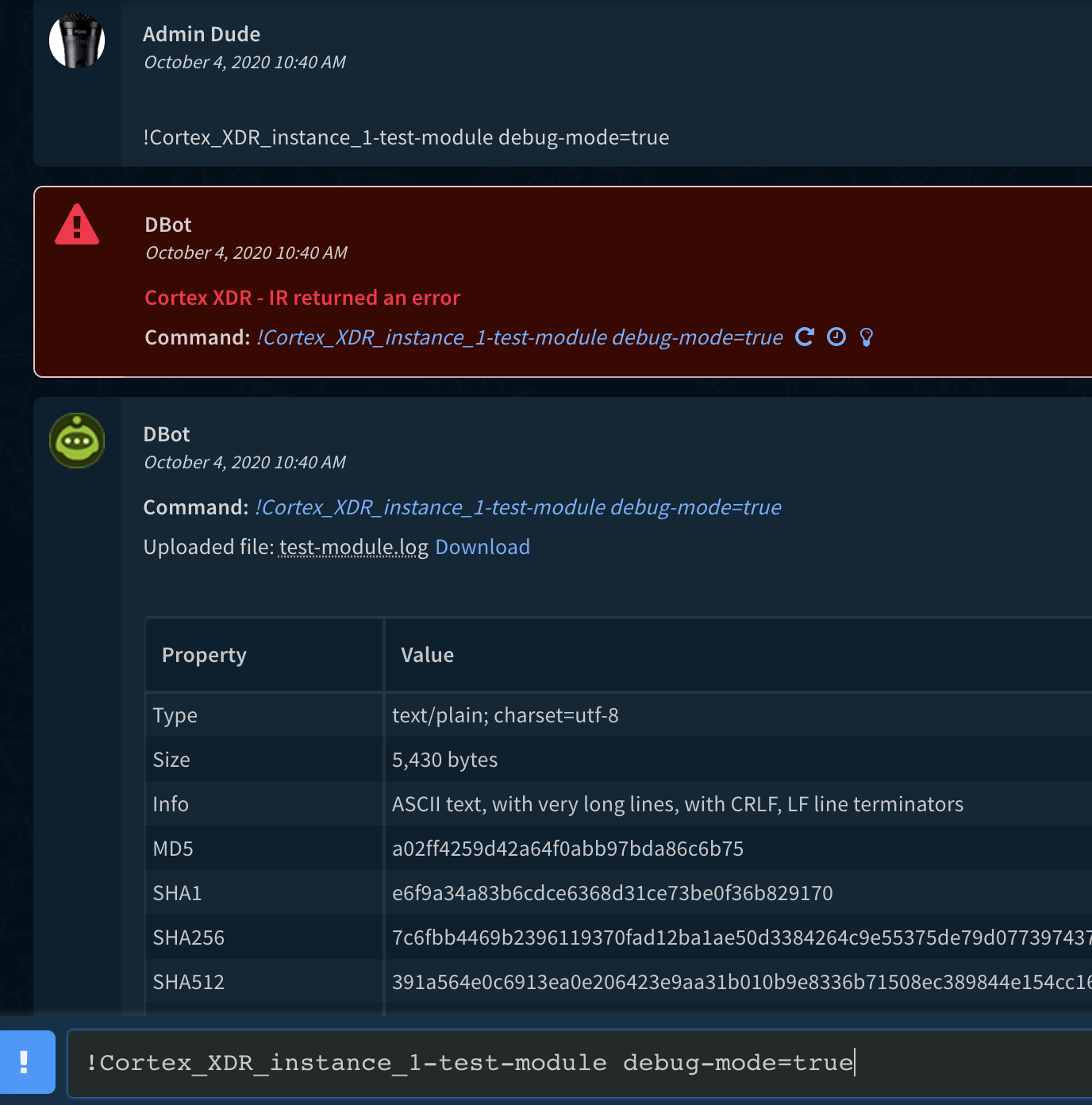 Edit this page
Report an Issue